Travel health in the future NHS

In March, NHS England announced a review after local health bosses identified £400m of spending they believe has little or no clinical value.  Travel vaccines were one of the ten 'low value' medicines mentioned on the list - see here to view a BBC news report.   This spurred me to write a personal reflection on the topic for the Practice Nurse Update in April. Also included is the Editorial which covers the subject written by Mandy Galloway.  As the General Election was subsequently called we are now in a period of purdah and no further government information will be released until after June 8th, but please read my article (click on the image below) and ensure for now you are still seeing travellers in a GP setting - you will be receiving funding for this at the present time. 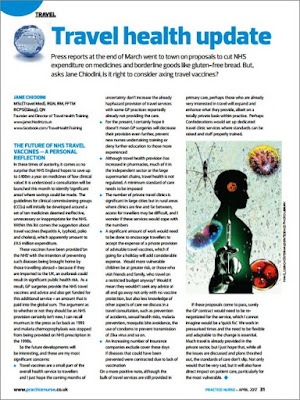 Jane Chiodini
Working as a Travel Health Specialist Nurse in the UK, I've been involved in this field of practice since 1990. I train healthcare professionals around the UK and also work part time running a travel clinic in primary care. See my website for more detail and loads of tools to help in your day to day practice at www.janechiodini.co.uk